Apples are one food my kids can always agree on eating. I decided to put an educational spin on snack time and talk about fractions with my kids. Keep in mind that my oldest just started kindergarten and my youngest is in preschool. This is a topic they both were eager to learn about because I told them that we’d be making a tasty treat with the apples once we were done using them to learn. 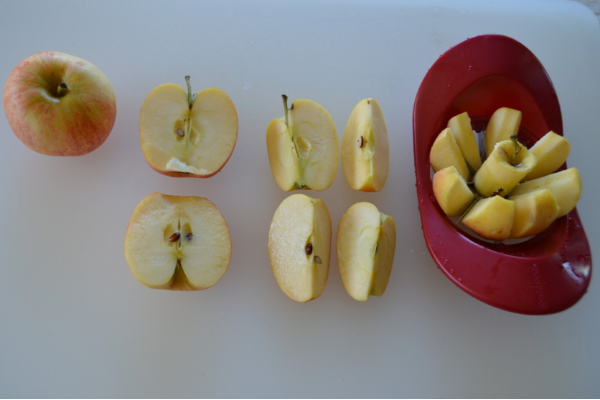 Using the center of the apple leftover from the pieces cut into eighths, I had my children predict how many seeds were in an apple. My daughter thought one seed (which seems appropriate because many fruits have one seed), and my son predicted five. I broke open the apple and we counted the seeds. We discovered that the apple we used had six seeds.

So simple…. I had my kids count how many apples were in the bowl. I then posed basic subtraction problems like, “If I took two apples away, how many would be left?” I had them take away the apples and count how many remained. 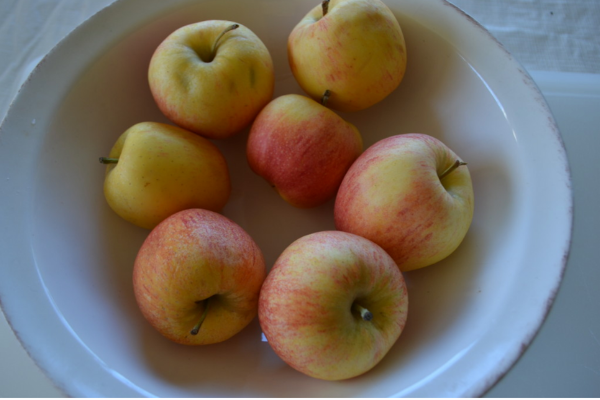 We certainly didn’t want to waste the apples, so we needed to eat them. My kids were so pumped when I told them they were going to be spreading peanut butter on the apples and placing mini chocolate chips on top. Of course (before I could finish my sentence) they wanted to know if they would be allowed to eat some of the chocolate chips.

I gave each child a bowl of peanut butter, another bowl with mini chocolate chips, a butter knife and some apple slices. After they spread the peanut butter on the apple, I gave them a number to count out and then place that amount of chocolate chips on top of an apple slice. This not only helped reinforce counting skills, but they used fine motor skills to pick up the tiny pieces of chocolate.

(My kids also suggested using Nutella with white chocolate chips or caramel sauce. It looks like we will be trying that soon!)

This lesson was a hit with my kiddos. I loved that it was inexpensive, quick (I had all of the ingredients and materials in my fridge or pantry), educational, and filled their bellies with a nutritious snack.

The end of summer and early fall is the perfect time to head to an apple orchard to go apple picking. Check out this list of local apple orchards. 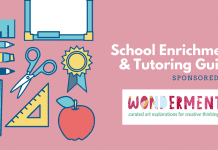 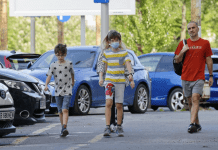 Preparing Children for a Safe School Year During the COVID Era 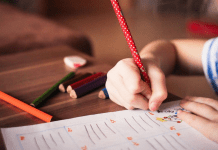 When Writing Became a Chore for My Sons

Top Things To Do In Galena

Ashley Liles - August 13, 2020 0
Have you visited Galena, Ohio before? It's just thirty-ish minutes from Columbus and has a lot to offer. We enjoy checking out new places...

Places to Visit Near Columbus While Social Distancing

In celebration of National Donut Day