It was Easter afternoon, and as I looked up from talking to my husband to see the neighbor running up my driveway in a panic, I felt the pit in my stomach that it wasn’t because he had good news. I heard him say, “she snapped her wrist,” and I took off too. As I crossed the back yard, I met my daughter, her right arm oddly hanging at her side, and her face ghostly white. Maggie was eerily calm. I knew instantly from its funny shape, it was broken, and less than 10 minutes later, we arrived at Nationwide Children’s Urgent Care on Diley Road. I was so thankful we have such amazing facility in our community. 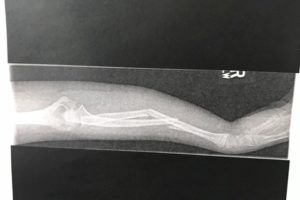 Before we were even all the way in the door, a staff person labeled her right arm with a sharpie and offered her a seat. Within minutes, we were through triage, and she received her first dose of pain medication. And before she had even returned from x-ray, it was mentioned she would be sent downtown to the main hospital campus for further treatment. I feared she would need surgery, but tried to remain calm so she didn’t see me upset. The x-ray confirmed what I already knew; she broke both right lower arm bones when she missed landing a back hand spring while on the trampoline. A technician made her a splint to stabilize her arm, and we loaded her into our car.

We pulled up to the Emergency Room about 6:00, 90 minutes after her accident. She was quickly moved through triage there, and we were placed in a room to wait. It wasn’t long before we met with the resident. The shock was beginning to wear off, and Maggie was in pain. After two more rounds of medicine, she was comfortable and able to rest. It was determined she would not need surgery (praise!), and instead, she would have a reduction. Maggie was given twilight sedation, where she was out of it just enough to not remember the procedure. Once she was “asleep,” we had to leave her room so the orthopedic doctor could use an x-ray machine to set her bones. Forty minutes later, her right arm was in a long-arm pink and green cast from her fingertips to her armpit, supported by a neck sling. 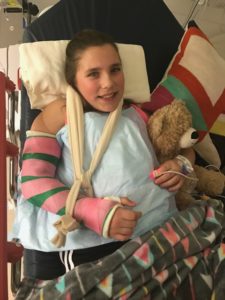 Maggie took the next two days off school to rest while the swelling resolved. She began to learn how to do everything left-handed, and my strong-willed, spirited daughter also learned to accept help for the things she could no longer do for herself, like get dressed, wash her hair or open containers. She even taught herself to write left-handed in the days that followed. Her determination and positive attitude inspired us all. Maggie was treated to a mini blowout by her grandma – she didn’t think breaking her arm was all bad. We used a protective plastic sleeve when she showered. A friend helped carry her book bag on their walk to school. Even her little brother pitched in to help Maggie adjust to life with “one working arm.”

We visited Nationwide Children’s orthopedic clinic five days later. Her bones were aligned and showed small signs of healing, but she was not out of the woods yet for surgery. The doctor said she would need to use the sling another week, and continue to limit her activity. Keeping an 11-year-old quiet in the spring, at the end of the school year, was no easy task! She went back to the clinic a week later, and Maggie was cleared for surgery (another praise!) and no longer needed the sling. 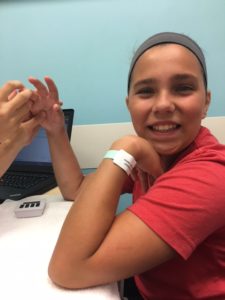 Having the cast became second nature quickly. She did not complain one bit and was the model patient. Two weeks later, Maggie was upgraded to a waterproof shorter cast, just in time for Memorial Day weekend and swimming season. The doctor determined a nerve was damaged during the break, and her ring and pinky fingers were severely bent. She was referred to hand / occupational therapy and given stretches to do several times a day.

When she broke her arm, we counted the weeks on the calendar and knew it would be close. Our family vacation was six weeks from Easter. Thankfully, the doctor agreed to remove her waterproof cast two days early, which meant delaying our vacation slightly, but not altogether. On May 30, her cast was cut off, and we left the hospital for the beach! 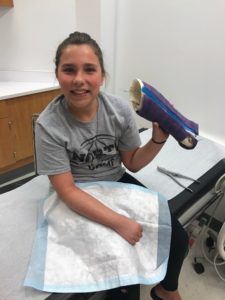 Maggie is still wearing finger splints at night, and stretching her fingers. She’ll follow up with orthopedics in early July to ensure everything is continuing to heal, but in the meantime, she is enjoying all of the activities summer has to offer. And she said feeling the ocean on both arms was totally awesome! Our family is grateful for the excellent care she received at multiple Nationwide Children’s facilities. 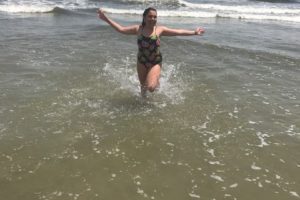 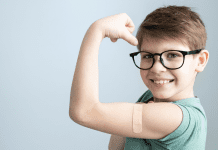 Where to Get COVID-19 Vaccinations in Columbus, Ohio 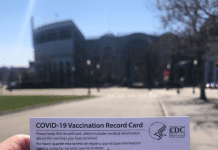 Columbus: We Can Do This!!