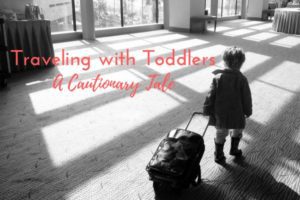 This is a cautionary tale. I, in no way, shape, or form, pretend to know everything (or, really, anything) about traveling with toddlers. I’m just a mom, sharing my experience.

Once upon a time…

I’m going to start this out like a fairy tale because, at the time, I had really hoped I was imagining the whole thing. Keep reading – you’ll understand.

My cousin was getting married in another state, and the whole family was invited. That meant me, my hubby, and our 2 kids (ages 3-1/2 and 23 months) would be traveling from Ohio to Texas. When we booked the trip, I was confident it was the right decision to keep my daughter (the 23-month-old) on my lap. After all, it would save us money. We decided to rent a car during our trip, so that meant either renting car seats at our destination or bringing our own. After pricing it out, we opted to bring our own. We also got carts they could attach to, allowing us to use them like strollers in the airport.

The trip to the wedding went well. The kids were well behaved and loved their car seat rides through the airport. As luck would have it, the flight out was only about 30% full, and so my daughter didn’t have to sit on my lap – she got her own seat and sat in her car seat (score!).

The flight home on the other hand…

Both kids were exhausted from 4 days of various wedding activities, not sleeping in their own beds, being off their schedules, etc. They were fussy on the ride to the airport, especially my daughter. The airport had a small play area for kids which we utilized for about 30 minutes. The kids seemed perfectly happy there. But when it came time to get back in the car seats and onto the plane – they were giant balls of fuss.

We tried giving her bottles. Giving her special snacks. We let her watch the iPad. But, she continued to fuss. Then, about 30 minutes into the 2-1/2 hour flight, we found out why.

She vomited.
All.
Over.
Me.
And the airplane seat. Luckily my husband, son, and any other passengers were spared.

As I sat there, covered in, well, I’ll spare you any details, I thought, “What do I do now?” My daughter was screaming, as only a 23-month-old can after she has emptied the contents of her lunch all over herself. We pressed the call button and a flight attendant came and I could see the same question in her face, “What do I do?” I asked for something to wipe myself off (ha!). She brought a few paper towels (ha ha!). I decided to head to the bathroom to try to clean us up. I always had an extra outfit in my bag for each of my kids for just such an occasion so I could get the baby cleaned up and more comfortable.

Myself on the other hand…I had nothing. And I was covered. So much so, I just threw the sweater I was wearing into the trash as soon as we got home. I didn’t even want to try to clean it up. Even my bra was soaked and stinky. Lucky for me, my brother and his wife were on the same flight, and he had a spare shirt. I donned it, sans bra. #sorrynotsorry

It took awhile, but we finally got my daughter calmed down enough for her to sleep for the remainder of the flight. In the back of my mind, I thought, “How do I handle a kid who gets airsick?” We had another trip – a much BIGGER trip – planned for the next month, and I couldn’t fathom dealing with an airsick 2-year-old for 5 hours. At least she would have her own seat.

Well, it did not end up being airsickness. It was a badly timed stomach bug my entire family dealt with for 2 weeks. (Never thought I’d be thankful for a stomach bug before.)

And, what did I learn from all this? Well, the Boy Scouts seemed to know all along – Be prepared. For the next trip, we stuck with the car seats/carts. Since my daughter was 2 years old for the next trip, she had to have her own seat. I came armed with a lightweight towel (to cover her in case of vomit), a change of clothes for her AND me, and extra wipes. And a self-reminder to “Keep a sense of humor.” It went much smoother.

Now I can say I survived a flight with a toddler with the stomach flu. In a way, I feel like a #supermom.

What sort of craziness have you endured when traveling with your littles?